Dr.-Ing. Max Schlötter GmbH & Co. KG is one of Germany’s leading specialist firms for electroplating. The company was founded by Max Schlötter in Leipzig in 1912 and is now run by the fourth generation of the family. Schlötter has a presence in more than 30 countries worldwide.

R&D traditionally plays an important role at Schlötter. Around 25% of the employees at the head office in Geislingen are active in research & development.
Our product portfolio comprises a wide range of proprietary chemicals. We offer approx. 1,000 different chemical products for general metal finishing (GMF), corrosion resistance coatings (CRC), decorative coatings, plating on plastics, electronics and PCB: 95% of our products have been developed inhouse by our own R&D.
The company’s international orientation is also reflected in its high export ratio with exports accounting for approximately 40% of turnover in the chemical part of our business.

Including subsidiaries in Europe and Asia, the Schlötter Group worldwide employs approx. 300 people.

Our company is named after Dr.-Ing. Max Schlötter (1878-1946), who established an electrochemical research laboratory in Leipzig in 1912. Max Schlötter had a life-long interest in research and development. He was one of the pioneers in the development of modern bright and high performance plating baths and registered more than 60 patents in his name in Germany alone. After many years of continuous experimentation, Max Schlötter finally managed to develop a process for the electrodeposition of bright tin, patented as DRP 746134. Apart from electrolytic tinning, he also made important progress in the areas of silver andnickel deposition. US Patent No. 1 972 693 from 1932 for bright nickel, which became the basis for all available bright nickel baths for many decades, was one of his most influential patents. 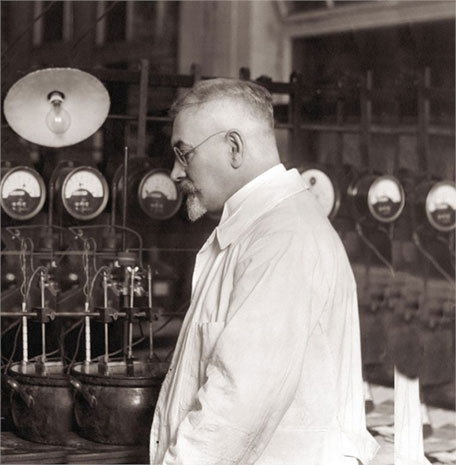 Schlötter wins the Innovation Award of the Federal State of Baden-Württemberg (Prize Dr. Rudolf Eberle) for the development of the SLOTOLOY ZN VX technology, a resource-efficient process for alkaline zinc-nickel.

Schlötter unveils a ne Tech Centre in Geislingen, which has an area of approx. 360 M² and boasts 50 electrolyte tanks with volumes ranging from 50 to 400 liters. In the Tech Centre, it is possible to plate customer samples and to test Schlötter processes on a pilot-plant scale.

Together with AGES Triallian Corp., Schlötter opens a PCB development centre in Taipeh for developing and beta-testing Copper electrolytes used in the PCB industry.

Schlötter aquires an adjacent building. A new effluent plant is put into operation in 2013, followed by a new Tech Centre in 2017.

Schlötter has been involved in developing acid copper electrolytes fro the PCB industry since the late 1960s. Schlötter is playing a leading role in the development of blind viafilling processes. Milestones include processes such as SLOTOCOUP CU 140 (since 2004, plating of blind microvias) and SLOTOCOUP BV 110 (since 2004, filling of blind microvias, pattern plating and the metallisation of
through-holes in a single-step procedure) which are launched in the market in 2004.

Schlötter establishes a new subsidiary in Wuxi, close to Shanghai in 2004.

Schlötter introduces a quality management system and is certified to ISO 9001 for the first time.

The development of zinc and zinc alloy electrolytes has played an important role for Schlötter for decades. In 1987, Schlötter launched SLOTOLOY 10, its first weakly acidic zinc-nickel alloy process. ZnNi coatings provide superb corrosion protection for steel and are widely used in this sector of industry for more than 30 years.

With the establishment of Schloetter Asia Pte. Ltd. in 1982, Schlötter has a presence in the ASEAN region.

In order to serve the market needs of Scandinavian customers, Schlötter established a subsidiary in Sweden, Schlötter Svenska AB in 1980.

In 1976, a new subsidiary was founded in Ireland in order to service the Irish market, where a new electronics industry was beginning to develop with a requirement for plating technology. Over the years, the Irish market changed and due to necessity Schlötter Ireland diversified and established new markets in microelectronics and semiconductor which began to emerge in the early to mid 1990’s. Today, Schlötter Ireland DAC provides contract blending to customers involved in the manufacture of medical devices which is the most recent of the new industry sectors where Schlötter Ireland has succeeded in gaining new business.

Expansion in the UK

In order to facilitate the presence in the British market, Schloetter Co. Ltd. was established in 1969. Initially based in Birmingham, the subsidiary now operates with laboratories, production plants and warehouse on an area of 11,000 square meters in Pershore, Worcestershire.

Bright Tin CULMO was patented worldwide in 1964. CULMO was not only suitable for the tinning
of household items, but also for use in
the rapidly developing electronics industry.

Restart after the War

Max Schlötter died on the 22nd May 1946. His daughter Ingeborg and his son-in-law, Dr.-Ing. Alfred Geldbach, assisted by Dr.-Ing. Joachim Korpiun, started the reconstruction of the company. The company acquired its own property and moved to the new location in 1950. In the following decades, the company premises has expanded continuously.

In 1944, Schlötter decides to reclocate to Geislingen because of increasing air raids in Berlin.

Schlötter achieved a breakthrough with the development of the first bright tin bath. This was the beginning of the success story of tinplate as modern packaging material.

Patent for the deposition of bright nickel

Max Schlötter was one of the pioneers in the development of modern bright and high performance plating bath. US Patent No. 1 972 693 from 1932 for bright nickel, which became the basis for all available bright nickel baths for many decades, was one of his most influential patents.

The research laboratory started to develop a process for the deposition of bright nickel. Due to his innovations, Dr. Schlötter was appointed honorary professor at the Technical University of Berlin om June 1929.

In order to be closer to their customers, the company is relocated to Berlin in 1915.

Foundation of Research Laboratory in Leipzig

Max Schlötter establishes his own “Electrolytical Research Laboratory” in Leipzig in 1912.

Do you have a specific question or would you like other information?